There are two options for those arriving from the North

1-Take the Firenze Sud exit of the A1 motorway. Once beyond the toll booth, follow the signs to PONTASSIEVE – BAGNO A RIPOLI and then head towards PONTASSIEVE.

From PONTASSIEVE follow the signs to FORLI’ as far as RUFINA. Take the road through town as far as the pharmacy where you turn left. 200 m later, you will reach MONTEBONELLO, cross a bridge over the River Sieve and continue straight ahead for 150 m to the STOP sign at Piazza Pertini. Turn right and 100 m later, having passed a traffic island with 4 olive trees, turn left, continue another 150 m to a stop sign. Turn right into Via Agostino Catalano, follow the signs for ACONE, driving uphill along a twisty road for 2.6 km before turning left onto a small road marked with a wooden sign saying “Podere il Poggiolo”. Our car park is just 600 m along that road.

2-Exit the A1 motorway at BARBERINA. Follow the signs to BORGO S.LORENZO – PONTASSIEVE for approx 35 km along the provincial road as far as RUFINA. In the centre of town, turn right at the cross roads immediately before the pharmacy. Proceed to MONTEBONELLO and then continue as described above.

For those coming from the South

Take the INCISA exit on the A1 motorway, and once beyond the tollbooths, turn right and continue along the SS 69 for 18 km to PONTASSIEVE. Once there, follow the directions described above at (1).

GPS / SAT NAV co-ordinates
N 43°50’ 24,69” E 11° 28° 43,78”
N.B.: In the last few km of the journey, many GPS systems will tell you to take minor / dirt roads that will take you up into the hills in the middle of nowhere. If you want to use your GPS, we recommend you type in PONTASSIEVE – Piazza Pertini, but once there, follow the written directions above.

By ‘plane or train:
Car hire is available at the airport and in Via Borgognissanti (not far from the main train station, “Santa Maria Novella” in central Florence). The closest airport is Florence’s “Amerigo Vespucci” which has flights to / from many major European cities. The closest railway station is in Rufina (just 3.5 km from the agriturismo) with regular connections to Florence (see above).

Even those who come to the agriturismo by car may decide that travelling to Florence by train is a valid alternative as Santa Maria Novella station is located right in the historic heart of the city.

DO YOU KNOW DANTE?

When our friendly local vet gave us Dante, he was a one-day-old boar piglet...
DISCOVER ITS HISTORY 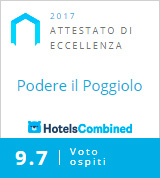